What is driving up real estate prices 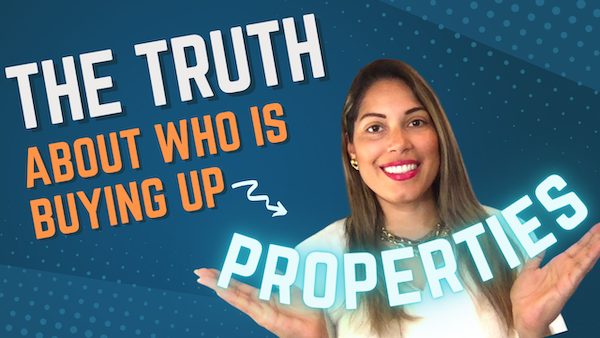 What is happening in real estate

Back in July I spoke of something really serious that has only worsened the real estate market since then and has gone completely understated…hedge funds are buying out homes in droves. They are outbidding actual home owners left and right with cash offers above asking.

Who is buying up all the inventory?

BlackRock is the world’s largest asset managers. Already owning more than $34 billion in real estate, their goal is to become one of the largest landlords and they are well on their way.

According to a NY Times article, BlackRock is buying every single-family house they can find, paying 20-50% above asking price and outbidding normal home buyers. Wall Street’s latest real estate acquisitions have ballooned to roughly $60 billion, representing hundreds of thousands of properties. It’s no wonder home buyers in this market are up against as many as 70 offers on a property and don’t stand a chance against cash offers almost $100K above asking as we’ve seen in homes in the Orlando area.

More than 1/2 of the countries properties are owned by institutional investors.

In the great recession, we saw over 6 million homeowners lose their home. While many have since purchased a property, large hedge funds like BlackRock took advantage of the opportunity and started sweeping up real estate. Almost two decades later, we have a new generation trying to make their splash in real estate with homeownership only to be pushed out during another type of crisis: inventory.

There are so many factors that are affecting low inventory, but the largest is the shortage of laborers and supplies which has in turn affected construction and new inventory which is a necessity in growing markets.

The Effect of Low Inventory

The effect of low inventory has created a wild west of sorts for sellers and buyers where sellers are definitely capitalizing on their earnings to an extent that has created buyer fatigue, frustration and really not even being able to keep up with the increase in prices.

FEDs have announced an interest rate hike (or two or four), but that doesn’t help solve any problem. In fact, it just worsens the situation for buyers because it will just continue to drive up the expense of purchasing a home.

One incredibly helpful thing we do on the listing side and I’ve seen it done for me on the buyers side, is real estate professionals working together to help actual home buyers get into homes instead of companies.

How? Leverage the offers we receive and give the home buyers a chance at competing to see if they can win. It still gives the seller the earnings they want while allowing the home buyers the ability to compete with large cash offers.

Not every agent does this, but those that want to give home ownership a fighting chance, try.

For more questions on the real estate market in Central Florida or to SELL or BUY in Orlando, Oviedo or surrounding areas, contact us at 407.801.9914.

2 thoughts on “What is driving up real estate prices”