3 Best Real Estate Markets in the Orlando area for 2017

Real estate experts have predicted that Orlando will be among the top real estate markets nationally in 2017. It’s placed at number seven among other growing cities like Portland, Oregon, and Sacramento, California. Analysts project a price growth of approximately 5.69 percent and sales growth of 6.1 percent. This means that Orlando home values will increase nicely in 2017.

Orlando is home to numerous attractive neighborhoods that feature a wealth of desirable properties. However, we expect three of these areas to bypass the rest in terms of Orlando home values over the next year. These are: Thornton Park in Downtown Orlando, Oviedo and Winter Park. A closer look at each of these communities reveals why they are especially appealing to buyers and why they should be considered when looking at where to purchase a home in 2017.

END_OF_DOCUMENT_TOKEN_TO_BE_REPLACED 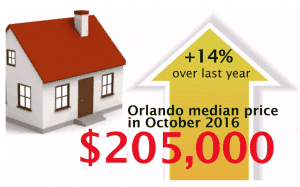 We are currently experiencing a shortage of homes for sale in the Orlando area. That combined with low interest rates is creating strong demand for home buyers which is creating a perfect opportunity to sell your home.

If you have been on thinking about selling your Orlando home take a look at the data from the Orlando Realtors Association below and let Waypointe Group know if you have any questions. END_OF_DOCUMENT_TOKEN_TO_BE_REPLACED

If investing or buying your forever home, check out these growing Orlando areas

The Orlando area is bursting with desirable neighborhoods. Some of these have become incredibly well-known, which tends to drive up prices. However, in these five up-and-coming neighborhoods, prices are still surprisingly low. What’s more, these cities have some of the lowest millage rates in the area, which means you’ll pay less in property taxes. Browsing through this list just might inspire you to buy a home in one of these neighborhoods before they really heat up. END_OF_DOCUMENT_TOKEN_TO_BE_REPLACED