Should You Pull From Your 401K to Buy a Home? 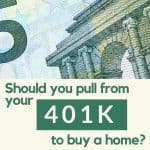 In an ideal world, everyone would put 20 percent down on a home purchase. This avoids costly private mortgage insurance, called PMI, but it also requires considerable time. Considering the many financial and tax advantages of home ownership, most people would prefer to be able to purchase a home sooner rather than later.

Borrowing From Your 401k

Investing in a home is a major financial step, and many people are willing to save for a considerable time to realize their dream. However, it may be possible to speed up the process by borrowing from a 401(k).

While a straight withdrawal from a 401(k) is attended by significant taxes and penalties, it may be possible to borrow the money instead. The law permits people to borrow up to $50,000 or as much as half of the 401(k) balance, whichever is smaller. Accordingly, someone wishing to buy a home could secure the 20 percent down payment they need by borrowing from themselves instead of from a bank.

Of course, paying back this loan is a requirement. Like other loans, money borrowed from a 401(k) is subject to interest. A five-year term is typical for 401(k) loans. Nonetheless, some employers may allow as much as a 15-year payback term when the funds are used to purchase a house.

It’s important to proceed carefully when considering investing in a home with a loan from a 401(k). Should you decide to change employment during the loan term, your employer will be within their rights to demand full repayment of the loan. In general, it’s best to choose a shorter loan repayment term and to be particularly certain that you will remain with the same employer for the entire period.

If conditions seem favorable, then you may want to proceed with a 401(k) loan. That’s because it will mean that you can avoid paying expensive PMI, which is virtually always required with a down payment of less than 20 percent.

If you buy the same home and make a 20 percent down payment after borrowing from your 401(k), you’ll eliminate the PMI payments for a monthly mortgage of $1,717. Of course, you’ll have to repay the $40,000 401(k) loan, which may have a similar interest rate of five percent. That would mean another monthly payment of $754 over a five-year period.

This means that the initial five years will be more expensive than if you had put 10 percent down and paid the PMI. However, after the 401(k) loan is repaid, your mortgage payments will be significantly less than they would have been if you had started with a smaller down payment.

Investing in a home is a major financial decision that shouldn’t be undertaken without guidance by experts. The team at Waypointe Group have the knowledge and experience that are necessary to guide you through the process. We will help guide you to make the best home buying decision possible and promise to provide honest advice.