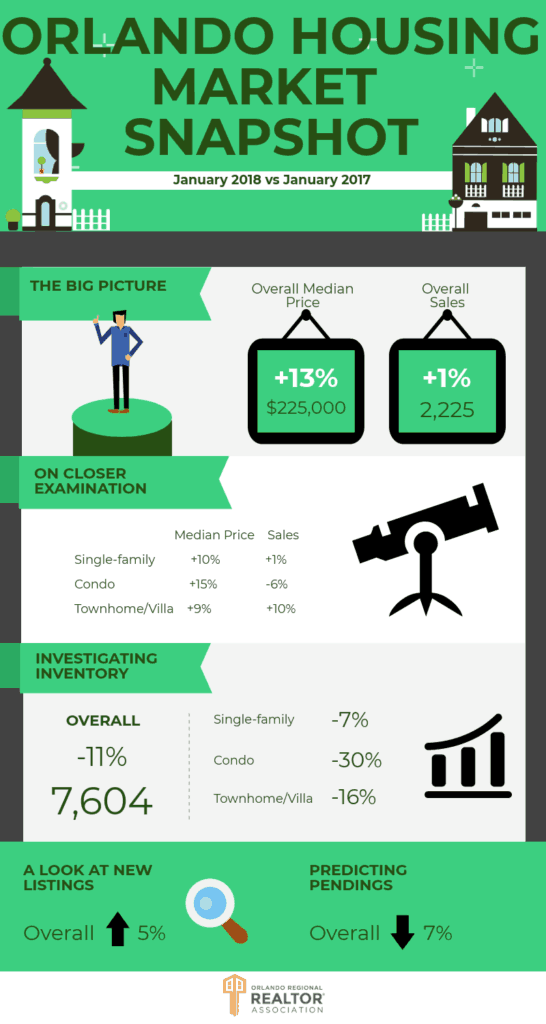 Orlando’s median home price continued along its upward trajectory in January while sales held steady with a 0.5 percent increase compared to January of 2017, reports the Orlando Regional REALTOR Association.

Year-over-year increases in median price have been recorded for the past 79 consecutive months; as of January 2018, the overall median price is 94.8 percent higher than it was back in July 2011.

Sales declined by 26.9 percent when compared to last month. “The nearly 27 percent drop between December and January is a decline that historically follows a big push to close in December as buyers seek to take advantage of homeownership tax benefits”, explains ORRA President Lou Nimkoff, Brio Real Estate Services. While low inventory conditions remain a significant challenge, REALTORS anticipate an improvement in month-to-month sales. In fact, the January pending sales tally increased by more than 1,000 homes compared to December 2017, making it the greatest month-to-month increase since ORRA began tracking pendings in 2006.

The overall inventory of homes that were available for purchase in January (7,604) represents a decrease of 11.1 percent when compared to January 2017, and a 1.3 percent decrease compared to last month. There were 6.6 percent fewer single-family homes and 29.7 percent fewer condos.

Current inventory combined with the current pace of sales created a 3.42-month supply of homes in Orlando for January. There was a 3.86-month supply in January 2017 and a 2.47-month supply last month.

Buyers need the assistance of REALTORS to help them compete against other buyers, for example by crafting attractive offers that take into consideration current appraisal issues and advising on contingencies, in addition to assistance through the many traditional functions that a buyers’ agent performs.

Inventory continues to be low and prices are up and steady, it’s a great time to sell! In addition, Orlando home values are nearing normalized, which is helping to eliminate “underwater” mortgage conditions for many sellers. However, sellers should be aware that while selling their home is likely to be quick (particularly in the lower price categories) securing a new residence could be a challenge and requires the assistance of a REALTOR. Those seeking to move up into larger, more expensive homes will have more choices and less competition than those seeking to downsize.