What the heck is going on in the Orlando real estate market? (My Rant) 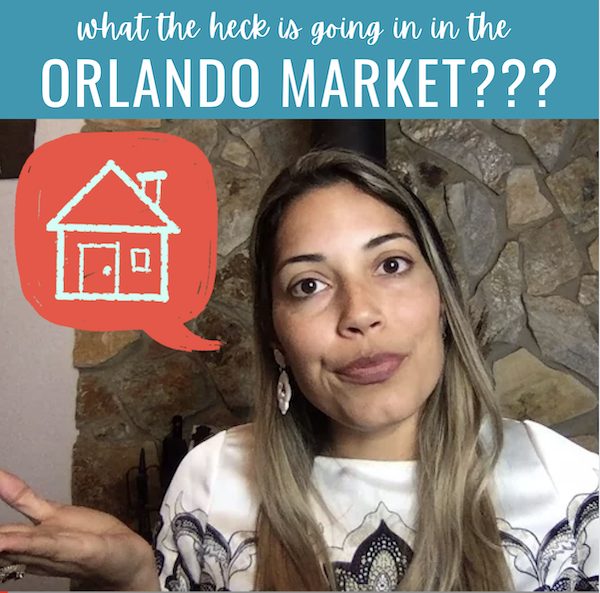 So today I am going to be sharing a little bit about what is going on in the real estate market. OK, we have had a crazy amount of inventory issues in Orlando, and I know we’ve seen this throughout the entire United States, but really, Orlando has taken a huge hit. We’ve had a lot of people coming from the northeast and the West Coast, relocating to Florida and making it really difficult for Floridians to purchase a home in their own backyard.

I wanted to go over a few stats that have happened just from Friday till today. CNBC reported actually that in the US there were nearly half as many homes for sale at the end of February compared with a year earlier, according to a new calculation by Realtor.com. Now, a pullback from sellers resulted in roughly 207,000 less homes that were newly listed for sale in the first two months of 2021a compared with the average the same period over the last four years.

That’s a big chunk of inventory that’s missing from our market. Now, in January, prices were up just over 10 percent year over year. Now, that’s according to CoreLogic. So let me give you an idea what this looks like. We have yet to see a price dip or decrease in the last 11 years. That’s not normal because of real estate cycle typically is about seven to nine years and then it kind of shifts. We haven’t seen that downturn, which we’re hoping the market, which it does, will correct itself sooner rather than later.

We don’t see a bubble of sorts… It’s not going to look anything like it did in 2008. It’s just not going to happen in that same way. We don’t have the same elements that were going on back then. That’s not what’s happening here. It’s people just aren’t moving. I’ve lived in the same house for eight years in August. That’s crazy. I have never lived in a house longer than two years in my entire life, which I know is not the norm.

It’s not the usual. However, my age demographic typically was the one that would be we were forecasted to be hopping from house to house in the tiny home kind of community, basically just not staying still, which ironically has flipped the script because our generation is showing that while traditionally you would see people resell within five to seven years, we’ve seen that number increase from seven to 10 years and some even higher. So it’s very interesting to see that people are staying put longer, especially in this market.

I mean, come on, even if you purchased a few years ago and you have equity, where are you going to go? There’s no inventory. Homes are crazy expensive. So even if you wanted to, are you really ready to take on a mortgage that’s double what you have now or almost like starting all over, even if you have a good down payment and you’ve got equity in your current home? People just don’t want to take that risk and then potentially go into a property that the bubble is going to pop or something’s going to happen where they’re going to lose equity.

So those are issues for real that are going on now. Higher mortgage rates are going to be cutting further into affordability and could mean fewer bidding wars as a spring market progresses, according to the MLS here in Orlando. I looked this up literally today, 2,514 homes in all of Orange and Seminole County are for sale. I don’t know if you guys understand how few home those how few homes those are, but that’s crazy. So Orange County, for those of you that aren’t from Orlando and don’t know, Orange County is where Disney, Universal, SeaWorld…etc.

That’s the hub of Orlando; downtown Orlando is there. And Seminole County is a smaller county right northeast of Orange County it pretty much hugs the northern side of Orange County. And it is just north of UCF area and it goes across all the way to the Apopka side being east Orange now with this county.

We have those two counties combined over twenty five hundred homes, which makes it very difficult for the influx of north, east, north and west coast people that we have coming in, including those that have been renting for a few years, saving up money to try to buy the first home that live here in central Florida. So it’s really difficult. Now, what I did was I looked at where I live in Oviedo, Chuluota, because we share a zip code with for part of Oviedo and all of it.

We don’t really we have 45 homes for sale. Now, those are just homes. Those are condos and townhouses. That’s it. And that can range anywhere from the smallest minimum to over two, three, four million. I think the most expensive was like four million. So that’s the gamut. By the way, there’s only like one four million dollar house in all of Oviedo and Chuluota, so that’s not the average. The average price point in Oviedo is $350,000, which is really high for an entry level first time homebuyer.

It really has increased. It has increased over one hundred thousand in the last few years, which is a huge jump. According to GoBanking Rate and MSA from the Consumer Financial Protection Bureau, they were stating that some cities, including Orlando, are actually going to be vulnerable to a housing downturn more than others. So they did a poll with 40 different cities and what they realized was Orlando was one of them. I’m going to give you the stats on Orlando.

So Orlando, the total housing units in all of Orlando is one hundred and thirty eight thousand four hundred fifty six. Now, the percentage of mortgages in Orlando that are delinquent between 30 and 89 days is 2.1%. So two percent of all of those hundred thirty eight thousand homes are delinquent between a month and three months. Now, the next percentage is even sadder. So over 90 days delinquent, we have one percent.

Three point one percent of homeowners are delinquent in Orlando on their mortgage. They’re waiting for foreclosure because foreclosures have been unable to happen because of Covid and all of the delays, because of legislation that’s in place and regulation title has not been able to transfer to the banks and banks have not been able to foreclose. Those continue to accumulate because there’s going to come a point where banks have to foreclose. They’re losing every single minute that these are delinquent and there’s delinquent ones that I’m not even counting into the mix of this, that whatever the bank has worked out with those individuals, families, et cetera, aren’t in this mix.

These are ones that are basically waiting for foreclosure. That translates to one in every six thousand four hundred eighty one homes are in foreclosure or will be in foreclosure. So the homeowner vacancy is six percent. While finding a home right now seems like an impossible proposition to buyers, there may be more possibilities in the future. The condition of those homes uncertain. Typically, foreclosed homes are they are distressed homes. We just don’t know what level of distress they’re in, but they are going to be more opportunities for buyers in the future.

It’s a rough market out there. It’s really challenging for buyers that are trying to look for their very first home. And I wish them well in their search. Appraisals are coming back pretty steady, but many of them are coming back a little bit lower. Where we have seen a challenge is in VA loans. That’s the only place that our brokerage has actually seen issues with the appraisal. But outside of that, cash offers don’t need it and conventional, we’re not seeing as many, but I have heard from lenders and other Realtor friends that they are seeing a dip in the appraisals.

Appraisals are coming lower. We’re in a very weird market where traditionally a seller will lower the purchase price to match the appraised value. But because there’s multiple offers, what a lot of them are doing and we’ve done this in the past as well, because we work for the seller when we take a listing, is that we make the buyers pay out of pocket a percentage or X amount to meet up either in the middle or cover what the appraised value is to the purchase price.

It’s not to the benefit of the buyer because they are paying above above the appraised value of a home. But in this market, it really is difficult, especially people who need to move, have been dying to move or for whatever reason, just really want that house.

That’s what we’re seeing. If homes are on the market longer than a week or two, be careful because homes are flying off the market.

Within the first two weeks, 55% of homes are being sold. They’re under contract within two weeks. In Orlando, it’s actually much shorter. We are seeing that houses are flying off within three or four days. If you see on the market for six days, I will tell you it’s only because they’re waiting for the multiple offers situation and they’re kind of reviewing all of the offers together. That’s what’s happening. This is what the market looks like.

I try to keep people updated as much as possible. Inventory still low. So it is what it is as we continue, as we see legislation change, foreclosures start coming on the market, we’re going to see a little bit more of an ebb and flow in the market. But right now the demand is incredibly high, supply is drastically low, so that’s where we’re at right now. If you guys have any questions ever about the market, you can always give us a call at 407-801-9914.

You can visit our website at WaypointeRealty.com. You can comment on YouTube and we will respond to your questions, concerns, request anything you want to talk about. But please continue stay tuned and we will be doing a first time home seminar just to kind of give people understanding of what the process looks like in this market and in any market, really like what it looks like to purchase a home from beginning to end so we can always be educating our consumers every chance we get.